A lot of opportunists made a bit of money importing yellow ribbon magnets (undercutting the legitimate entrepreneur who drove that fad) in 2003. Now, these guys sell Gadsden flags, the yellow ones with a snake and “Don’t Tread on Me.”

This flag’s symbolism can be traced back to 1775, where it was used by the first Marines who blockaded British supply ships. These men put their lives on the line to protect their communities from military oppression by a distant government that offered them no representation and no peaceful means of influence. Presumably, the Tea Partiers that are waving these flags at rallies see strong parallels to the modern plight of wealthy Americans who would love to employ them, but cannot risk it with the imminent danger of pre-Bush tax levels and employment so costly it enables the employed to see a doctor.

Of course, there are any number of American flags that could serve this purpose, but they needed a new one since the Stars and Stripes are now sullied by association with representatives that were elected by their fellow countrymen, and a President who is clearly a descendant of post-Mayflower immigrants. What better symbol for their anger than the snake? 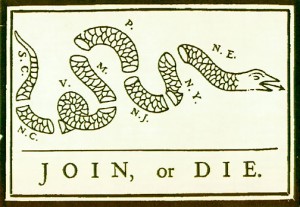 Except the use of the snake to represent the US was popularized by Benjamin Franklin, starting 20 years before those Marines, as a call for unity. Every political movement in this country has claimed the ancestral support of our founding fathers, but I don’t think Ben would support any of the divisive rhetoric of our age.

I have to wonder where all those magnets went. What prompted so many people to remove them? Do they no longer support our troops?