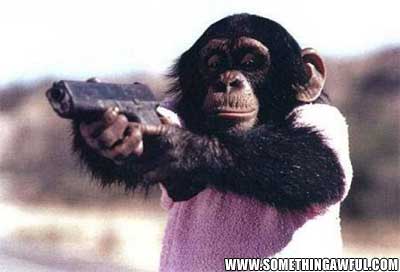 The people of my city were powerless to stop the destruction of their history, and just turned down a chance to finally take fate into our own hands because we were told change is evil. Pecuniae obediunt omnia.

My state, meanwhile, has chosen to prioritize highway construction. And most of my time zone participated in the red tide of “values” and fear that saturated rural America.

So, we’ve failed to take the gun away from the monkey. How best to handle the armed primate, then? Run.

Short of a marriage of convenience, though, it’s quite difficult to leave. Even if I did, as Barry Crimmins warns, I risk just becoming a victim of our foreign policy. Furious George has a big gun.

I could just retreat to a more like-minded part of the country, but then I’m still buying the ammo and living under Ashcroftian principles. At least until someone redraws some borders.